The TSM 2022 PepsiCo event focused on the company's next promotional plans, sales, and advertisements. The event was split into two sections.

The second component was that each company had a goal to meet, and those who met it were recognised during the performance. To discuss their planned marketing and sales of their products' incoming commercials, as well as to recognise and award those products that had met their yearly goals.

For the event, we created a platform where we registered everyone's information on the website. For audience engagement, we had established a microsite with sports-related games. The microsite includes a networking area with zoom integration, where PepsiCo's entire team could speak with upper management before the show. With lights, camera, sound, and our servers, we built up a green chroma setup in the Pepsico headquarters.

With our assistance, 550 individuals attended the event and interacted with our microsite, which featured games and zooms interactivity. 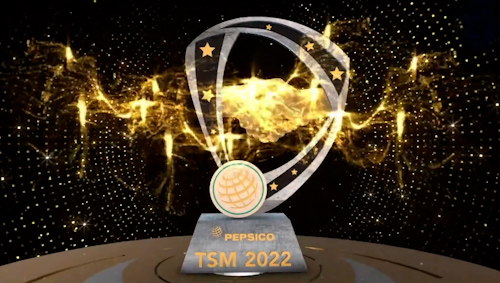 The attendees took part on the first day of the event, which began with a speech from the chairman, followed by presentations and videos.

Suni Grover's performance was pre-recorded in our Mumbai chroma studios, and Tagglabs captured every detail by live-streaming the event.

Sunil Grover kept the crowd amused throughout the evening awards presentation by engaging and performing with and for them.

Two live participants, each from a different studio, were also on stage. We welcomed both the head of Mondelez, who was live on stage from Delhi and a Mumbai anchor, who looked to be on stage together. The most intriguing and unforgettable component of the experience was this. Mondelez was able to host a virtual event with our expertise, in which the audience was virtually engaged by Sunil Grover's amusing act. The entire event was a success thanks to Tagglabs' involvement. The GroupM Choreo’s was an internal award ceremony held in three cities: Delhi, Bangalore, and Mumbai, with Mumbai serving as the primary hub. The purpose of the award ceremony was to recognise and thank the company's personnel for their efforts. We assisted GroupM in hosting an internal award event for all of its employees from three separate locations, Delhi, Bangalore with the primary hub being Mumbai.

Tagglabs set up a chroma setup with multiple attendees from Delhi and Bangalore within Mumbai's GroupM organization. The event setup was put up in each of the three locations: Delhi, Mumbai, and Bangalore. In each of the locations, all of the employees and nominated participants were present. A large number of people attended the event via MS Teams, thanks to our efforts. With the addition of Jonty Rhodes as Chief Guest. We caught the start of the red carpet moment, making the nominated employees feel like celebrities. We projected the attendees' arrival from three distinct locations when the event started. While the nominees were being announced, we even aired their names on the screen.

Each of the locations contained a stage where the awards were presented. We broadcasted and post-produced the entire award event. With the use of our Chroma Setup, we were able to capture Tisca Chopra, the event's MC who looked ravishing while she was handing out the awards to the respected winners. With our creativity and broadcasting, we combined all of the nomination and winner feeds from Mumbai, Delhi, and Bangalore and projected them on the green screen in Mumbai, where Tisca Chopra was presenting awards.

While every employee was getting an award at their different locations, we filmed the unforgettable moments of the award ceremony. Participants were able to effortlessly attend the award show and have a good time thanks to our chroma setup, live streaming, and broadcasting of the event. In gamification, the mission entails achieving the business objectives you set for your project. To properly organize a mission, you must first understand the difficulties and concerns that the business that you intend to use gamification to solve faces, and you must do it extensively. SMART objectives are an excellent approach to communicate what you want to do and to see if you have accomplished it after the process. Research is required to design processes to fulfil your player's needs. There are various methods to do so: